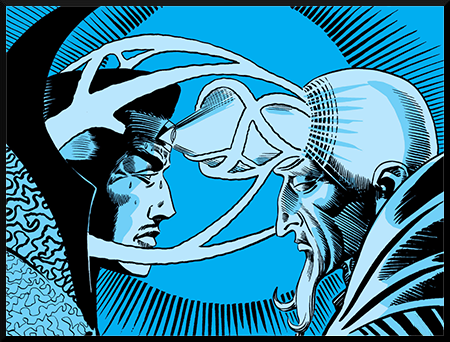 When we last left our hero he barely escaped the clutches of Baron Mordo and Dormammu teaming up. With the Ancient One left in a coma, only muttering the words Eternity, Dr. Strange begins his search for this entity in what ever form it might be in. Issue 135 has Stephen starting with seeking out an old apprentice to Baron Mordo. That seems like a terrible idea. Sir Baskerville, which is a great name for an old practitioner of magic, lives in secluded mansion in what I would assume to be the UK based on the heavy rain and name.

Sir Baskerville eagerly greets Dr. Strange and instructs him to get comfortable as he quickly wanders off. Strange senses something is not right as we move to Dormammu’s dimension where he is replaying some magical security footage of the Mindless Ones invasion in the prior issue. He is stunned to find the silver haired girl (Clea but who is nameless for now) is the culprit.

Cut back to the mansion where we are completely not shocked to find Sir Baskerville contacting his old master Baron Mordo. Mordo wastes no time in sending a minion to the mansion and the two attempt to ambush Strange. Suspecting the trap Strange creates an illusion of himself to distract them while using ANOTHER distraction of an armored suit with his cloak of levitation inside to separate them from each other. Trapping Baskerville, he scans his mind to finally confirm his suspicions that Dormammu has been working with Mordo this whole time.

The next issue has Strange traveling across the world talking to various practitioners of magic to find any information on Eternity. He eventually meets with a senile mystic named Genghis who claims he has seen Eternity and that an old scroll contains the spell to reach him. Without wasting time he recites the ancient words of the spell which opens up a portal to another realm, a very creep realm. In a dense fog Dr. Strange moves by massive pillars constructed entirely of lifelike masks until he reaches a man with all four limbs bound and his eyes covered. The man asks for help and Strange gladly helps him out but as soon as the eyes are exposed he reveals himself as a demon of the realm and swaps faces with Dr. Strange.

The demon covers Strange’s face so that he can never escape. What the demon doesn’t realize though is that he is now wearing a feisty cloak of levitation. Strange uses the cloak to trip and tie the demon up and tear off the face cover so that he can regain his body back. The last two issues feel like they inspired the cloak in the movie which has a mind of its own and is a neat evolution that keeps in the playful spirit of the cloak here. Strange uses his magic to shatter that dimension and ends up back at the secret hideout of the comatose Ancient One.

Frustrated by the lack of answers, Strange decides that he must attempt to use his magic to mind meld with the Ancient One. The monk taking care of the Ancient One begs him not to for the safety of both of them but is ignored. Issue 137 is entirely about the intense sequence as Strange probes the mind of his master, encountering mental trap after mental trap. Finally he breaks through and the Ancient One is relieved and proud of the way he has fought against Dormammu. He gives him the mystic incantation needed to reach Eternity and find he power he needs.

Exhausted from the interaction, Strange passes out and is found by the monk who helps him recover. With no time to lose though, Stephen moves outside and recites the newly revealed spell. It triggers a trippy transformation as the Eye of Agamotto moves from his neck, growing and morphing into a gateway to Eternity. The issue ends with Strange taking the leap of faith into the new dimension.

This final issue is what I’ve been waiting to get to for many years. What we have here is some peak Steve Ditko art visualizing the abstract. I can only imagine what readers were thinking in the 60s when this came out. The image above is iconic and is often referenced when talking about Ditko’s art. Stan Lee makes the right choice here and allows the issue to be told more visually than most, pulling back on the words.

Strange wanders through this fantastic dimension searching for Eternity. He comes across what is described as a microcosm, an entire universe. It starts to take the form of a humanoid and proclaims its identity, Eternity! His revelation is actually a splash page, which is a term used when there is a singular panel on the page that allows the artist to stun the reader.

Eternity wastes no time in telling Dr. Strange to shut up and sit down. It doesn’t specify what will happen, but warns that no mortal can speak to it. It informs Strange that he is only the 2nd mortal to even do so, only the Ancient One is before him. To grant Strange power he must pass judgement. I can only imagine the terror going on in Strange’s mind as he must sit there in silence. Eternity morphs back into his microcosm form and holds. Left with few options, Dr. Strange begins to leave when Eternity reemerges and tells him to wait. It tells him that his request for power is denied. Not because he doesn’t deserve or need it, but simply because he already possesses the wisdom to overcome his opponents. Eternity departs and leaves Strange confused and uncertain.

Once he returns to the mortal realm he is shocked to find that Mordo has captured the Ancient One in his absence. Dormammu has found and imprisoned Clea as well. The final battle against the two is staged as the issue ends. I enjoyed this arc, I think Dr. Strange is at it’s best when he is wandering other dimensions and encountering beings of unimaginable power so this checked all the boxes.